What should be so contentious about the Hebrew language? Why did linguist Prof. Ghil’ad Zuckerman receive death threats in response to his last book? Have verb conjugations suddenly become divisive? In their Sicha talk of June 7 (From Ivory Tower to Colloquial Use, Historical Text to Contemporary Slang: Hebrew’s Internal Tension as Living Language) Profs. Shmuel Bolozky & Ghil’ad Zuckerman spoke about the deep-seated arguments in the world of Hebrew linguistics – and essentially why those are about a lot more than just language. They themselves also, unsurprisingly, disagreed.

One can get the gist of Zuckermann’s argument from the title of his book, Yisraelit: Safah Yafah  – Israeli Is A Beautiful Language. I would say that the book is only out in Hebrew at this point – except he would disagree. It was written in Israeli. Yes that language we all call Hebrew, at least the version of it spoken in Israel – he urges us to call Israeli. Hebrew is a historical language, in which the texts of many major Jewish religious documents – The Tanach, the siddur (prayer book), the Haggadah, medieval poetry, etc. – were written. It is over 3000 years old. Israeli, on the other hand, is the spoken and written language of the citizens of the State of Israel, and it is less than 150 years old.

So the first thing that Zuckermann and Bolozky argued about is whether this characterization is accurate – Is Hebrew one language or two? Is it the product of evolution – or of a revolution? To use Zuckermann’s clever image:  is Hebrew Mosaic, or a mosaic?

But why is that important? Because it’s not about language, but about identity.  If unity of peoplehood requires, or is even just symbolized by, unity of language, then proving the disunity of Hebrew could signal a break in the unity of the Jewish people—tantamount to saying that we are not one people, with one history, with special connections to one particular land. Zuckermann’s linguistics have been branded both post-Zionist, and even anti-Jewish-peoplehood, since it implies that the Jewish people are no longer connected through threads of a common tongue.

What are their claims, pro and con? Watch the talk. That is far from the only thing they speak – and argue – about (should there be a Hebrew language academy? How much have other languages influenced, or should influence Hebrew?), and there are many more interesting issues raised, large and small.

But we want to hear what you think! Write your comments here about how you see the nature of Hebrew from ancient to modern, and the relationship of Jews everywhere to each other and to Israel, in the realm of language. 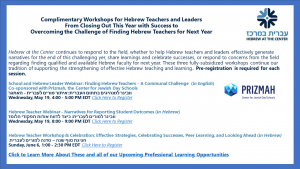 שיחה/Sicha: Hebrew Between the Academy and the Folk 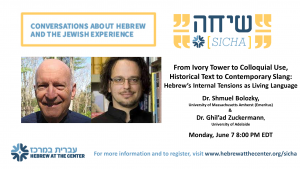 Drs. Ghil’ad Zuckermann and Shmuel Bolosky engaged in a compelling conversation about the dynamic nature of a living language and whether the Hebrew of yesteryear is the language spoken today in Israel . View the Recording.

הֶ שֵׂ ג Heseg, the Hebrew word for achievement, is an annual event recognizing middle school, high school, and college students who have achieved the Global Seal of Biliteracy in Hebrew. Central to the celebration is the presentation of the Scroll of Achievement, highlighting each of the participating students, their schools, their grade, and the date and level of their Seal. Recorded February 7, 2021 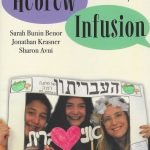 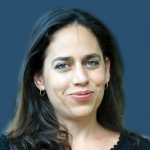 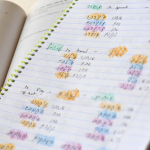